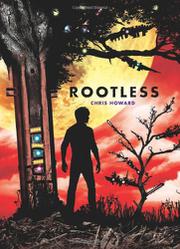 In a blasted, post-apocalyptic future, only three life-forms remain: humans, omnivorous locusts and the bioengineered corn that has become the sole source of food and fuel to civilization’s remnants.

Banyan, 17, makes his living as his dead father did, by fabricating trees from scrap metal. A wealthy landowner commissions him to build a forest, providing as a template a beautiful, yellow-leaved tree tattooed over the torso of his wife. Stranger still, the woman’s daughter shows him a recent photograph of a man—his father!—chained to a living tree. In short order, Banyan and a motley crew—his client’s son and a charismatic pirate girl, joined at various points by the wife, her daughter and the landowner’s Rasta bodyguard—are racing the landowner to the trees. They just have to get past GenTech’s massive cornfields and the locusts that live in them. Howard has a gift for the phantasmagoric image: the killing Surge that is this future’s ocean, the bark Banyan finds growing on a homeless man, the swarm of locusts descending for the kill and more. But he takes huge narrative leaps and skimps on worldbuilding, neglecting to explore this GenTech-controlled economy or where oxygen now comes from. It’s a refreshingly male-oriented world, though, despite the abrupt attraction between Banyan and the pirate that feels chucked in to provide the now-requisite romantic element.