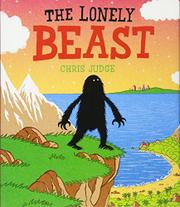 Like one of Sendak’s wild things embarking on a journey of its own, the hairy monster in this boiled-down quest tale abruptly sets out for parts unknown.

Being a featureless, tree-sized black silhouette with two yellow eyes, the solitary Beast looks menacing but leads a peaceable existence in a remote forest. Responding to a sudden yen for companionship, he departs one day on a long trek over land and under sea—arriving at last, after many adventures, in a city whose residents quickly get over their initial terror to make him welcome as a gardener in the local park. Being lonely still, he broadcasts public appeals in hopes of reaching others of his kind, then, when that gets no response, sets out again, retracing his original route. Using what looks like paint and cut-paper collage, Judge creates open settings in artfully contrasted colors and textures that give his central figure both a strong visual presence and an enigmatic air carrying hints of deeper meanings. Or maybe not: The Beast arrives back in his garden to find that other Beasts have gathered from all over the world to throw him a surprise party and to stick around forever after for nightly wild rumpuses.

The story could use a little more internal logic, but Judge’s art stands out. (Picture book. 6-8)