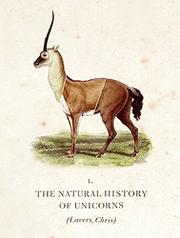 THE NATURAL HISTORY OF UNICORNS

Lavers (Natural History/Univ. of Nottingham; Why Elephants Have Big Ears: Understanding Patterns of Life on Earth, 2001) ingeniously tracks the myth-making of the unicorn, a 2,500-year “windy road with many charming vistas, and many strange ones.”

The author seeks “to say a few things about the unicorn that have not been said before…to draw attention to the myth’s natural history.” He begins with Ctesias of Cnidus, a Greek physician who resided in Persia in the middle of the first millennium BCE. Ctesias gave us the first written description of the unicorn we have come to know. Building on Ctesias’s account, Lavers looks at the Indian rhino, kiang, onager, yak, oryx and the chiru of Tibet (“How appropriate that the spiritual home of the unicorn is Shangri-La”)—by most measures, creatures as magical as the unicorn—fashioning the chimera from the various fauna at his disposal. It is an enjoyable natural-history detective story, in which the unicorn becomes a symbol with weighty medical, political, erotic and religious associations. Lavers follows the creature through Gilgamesh, the Mahabharata and the Bible (including the work of Bishop Ambrose of Milan, in whose hands “a Jewish cow gradually metamorphosed into a symbol of Christ”), and examines its role in medieval tapestries and the Psalters. The author then moves on to the unicorn’s secular career as a prestige gift and Romanticism’s antidote to the confining rationalism of the Enlightenment. Lavers’s enthusiasm is infectious and nicely tempered, even when he is off on a wild-goose chase, as in his discussion of Baron Friedrich von Wurmb’s African misadventure in 1791 or the excitements bestirred by 19th-century explorers that were a poor cloak for colonial interests.

Lavers makes an elegant, colorful guide to the unicorn’s myth, marvel and the ties that have bound it to human progress.