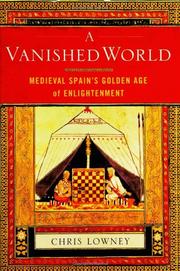 A thoughtful visit to medieval Spain, where Christians, Jews, and Muslims once lived side by side—and the Muslims were in charge.

The Visigothic rulers of post–Roman Spain were great warriors and reasonably able administrators. Still, writes Lowney (Heroic Leadership, 2003), they ushered in “the economic and cultural stagnation that later historians dubbed the Dark Ages” even as they promulgated anti-Semitic laws that punished a people who, some historians hazard, were in Spain even before Christianity took root. Then came the year 711, when 10,000 Moorish soldiers swiftly conquered most of the Iberian peninsula, establishing Muslim rule over five million inhabitants and instituting a government that extended more or less equal rights to all. In the golden age that ensued (which is not to be confused with the golden age of Phillip II), Spain became a center of learning and culture as encyclopedists and mathematicians filled the plazas of Granada and Seville; al-Andalus taught the future Pope Gerbert how to do his numbers and allowed the courtier and poet Samuel ha-Nagid to become “the most extraordinarily accomplished Jew not only in Spain but anywhere in medieval Christendom, and one of the most accomplished in any era in European history.” Though religious and ethnic tensions were far from unknown during the eight centuries of Muslim rule, fraternity was the order of the day; Lowney cites, for instance, legal records recording the aftermath of interfaith bouts of drinking and carousing, when partiers of all faiths wound up in the hoosegow to sleep it off. Other kinds of mixing exercised the wrath of the Catholic hierarchy outside Spain, and when the Muslims were finally driven from Iberia in 1492—and Jews who refused to convert expelled immediately thereafter—those Spaniards who advocated the view that ecumenicalism was possible were tortured and burned at the stake for their trouble.

Lowney’s treatment is less fluent than María Rosa Menocal’s Ornament of the World (2002), but still of much interest to those seeking evidence that we can, in fact, all get along.