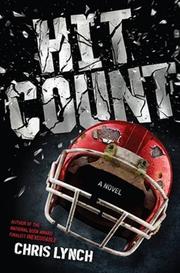 A high school football player is relentless in his effort to become a ferocious linebacker, ignoring the damage his body may be experiencing.

Arlo loves football and happily follows his brother, Lloyd, on the school team. His family is divided: his dad supports their playing, but their mother is so concerned about the sport’s dangers that she keeps her own file of information about concussions. The two brothers begin to move in opposite directions with the team, Lloyd quitting and Arlo becoming more determined to get faster and stronger. Lloyd enters a downward spiral, seemingly unable to stop it; meanwhile, Arlo becomes a nearly unstoppable star, but his fierce play begins to trouble his coaches and his girlfriend. Even when he is removed from the team due to his high “Hit Count,” he refuses to face what football may be doing to his brain and his body. The strength of this hard-hitting novel is Lynch’s portrayal of the drive and hunger of young football players. The action is authentic and captures the game’s speed and violence. The family dynamic and Arlo’s relationships with his girlfriend and friend add texture. These combine to counteract an uneven pace and relatively loose structure.

This intense, timely story provides incredible insight into the reasons why knowledge of football’s potential danger is not enough to keep young players from taking the field.