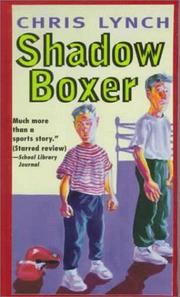 In the five years since their father's death from accumulated boxing injuries, 14-year-old George has earnestly taught his younger brother Monty how to fight—but not how to stop fighting; now, to his dismay (and his mother's), Monty is growing up in his dad's image, with "the heart of a lion and the head of a starfish,'' sneaking away to Uncle Archie's gym to train, going off on his own, coming home with the marks of street fights. Lynch surrounds George and Monty with a vivid tragicomic cast—from Chaz, an unwelcome Big Brother, and Nat, an unsavory building super whose only tools are a hammer and a roll of duct tape, to the horribly abused Rafkin children and their psychotic father. The subplots for each of these characters may be too neatly closed (having nerved themselves for a rescue, George and Monty charge into the Rafkin apartment only to find it empty), but they add comic interludes and build a sturdy emotional base for Monty's restless anger. This first novel, though, is less a study of the perils of violence (organized or otherwise) than a penetrating look at two close brothers—one who takes his responsibilities as man of the house too seriously, the other beginning to slip the leash. In the end, watching one of his father's gruesome bouts on film, Monty does learn that other lesson. Brutal, a little too tidy, but memorable. (Fiction. 11-14)