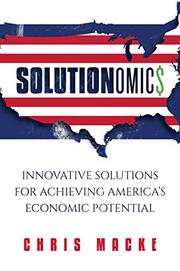 A sweeping plan for political and economic reforms in the United States, pragmatically based on policies’ rates of return.

According to debut author Macke, the principal problems that beset the United States are politically generated—a series of unforced errors made by politicians who elevate partisan considerations over practical benefits. He proposes a new “action plan” that replaces “today’s established system in which the spending of taxpayer dollars is based on campaign donations, lobbying dollars spent, and which special interest has more power” with a decision-making process based on return on investment. First, Macke supports an “incentive-based corporate tax policy” that ties the availability of tax breaks to a company’s performance in hiring and providing wage increases. Second, he formulates a trade policy that emphasizes the enormous leverage of having the “largest, most affluent market in the world” that every nation want to access. The government should use that incomparable advantage to renegotiate fairer trade deals globally, he says, even if that means the judiciously deploying protectionist instruments, such as tariffs and quotas. Macke proffers some boldly original suggestions; for example, in order to avert a future financial crisis, he recommends that executive compensation at banks should be linked to the repayment of loans they approve. He also argues that congressional pay and pensions should be pegged to the overall performance of the economy. The author covers an impressively broad swath of political terrain along the way—proposing a four-step strategy to reform Congress, a new approach to the funding of higher education, and a road map for the expansion of the middle class. This remarkable breadth, however, is also a vice, as Macke covers too many subjects to address any of them in convincing depth. He also has a tendency is to reduce complex topics to a tug of war between common sense and “myths” to be dispelled, rather than empirically engaged. Although his arguments are consistently provocative, they’re disappointingly dismissive of political reality. Indeed, the author seems uninterested in how significant legislative reforms would be passed by a Congress in which he has so little faith.

A refreshingly unconventional anatomy of the nation’s economic ailments, but it presents its remedies too quickly and stridently.