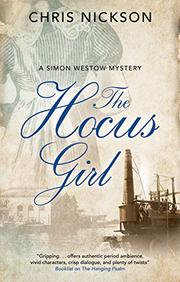 A thief-taker—someone hired to “find what had been stolen and return it for a fee”—and his assistant risk their lives to help friends.

In 1822, Leeds is already crowded with factories staffed by the desperately poor, and the wealthy owners are worried about revolution. Although thief-taker Simon Westow and his wife, Rosie, understand what it’s like to have nothing, they’ve made a good life for themselves, their twin boys, and Simon’s assistant, Jane, who lives in their house. Simon and Rosie know nothing of Jane’s past but recognize her ghostlike abilities and her skill with a knife as valuable assets in solving mysteries (The Hanging Psalm, 2018). Siblings Emily and Davey Ashton often fed and housed Simon when he was a penniless teen. So when Davey, who dreams of equality, is arrested for sedition, Simon will stop at nothing to save him. Ambitious magistrate Thomas Curzon seems to be spying on and arresting people who protest the awful conditions they must endure; his vicious bodyguard, Whittaker, does the dirty work. Busy with well-paid jobs of recovering stolen property from people like Charlotte Winter, a hocus girl who drugs men and steals their valuables, Simon resolves to track down the spy who helps Curzon get people arrested on bogus charges. In this he’s helped by Jane’s uncanny ability to know when she’s being followed. He finally hears about Dodd, a mysterious suspect who’s traveling with a woman. But this intelligence comes too late to stop Whittaker from going on a killing spree simply because he enjoys it. Soon after Jane removes her savings from a box she’d hidden in the woods and brings it to the home of Catherine Shields, a motherly woman who's the only person she loves, she sees Charlotte digging up the empty box. When Catherine, who refuses to reveal the hiding place, is beaten by the thief, Jane cannot fathom how anyone could know her secret. Using every resource at their command, she and Simon work to free Davey and take revenge on the people who are killing to cover up myriad crimes.

This historical tour de force reminds readers who come for the mystery that life hasn’t changed for the disenfranchised.