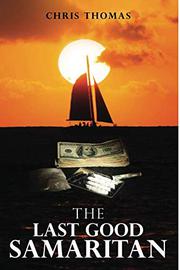 An ex-cop discovers a drug cartel’s huge money stash—but the group will do anything to get it back.

Jack Williams doesn’t feel like a lucky man as this thriller opens. He’s an experienced former Marine sniper, MP, and detective with the Denver Police Department, but now drives trucks for a living. Many would call Jack a hero for shooting a pedophile in the head to prevent him from assaulting a terrified 8-year-old boy, but an “ambitious DA” tried to make an example of the cop. Though Jack didn’t serve jail time and was convicted on lesser charges, he was dismissed from the force and then his wife divorced him, gaining custody of their two daughters and moving to California. But Jack’s luck seems to turn when he’s driving on a steep, winding Colorado mountain pass at 3 a.m. The cargo van ahead misses a curve, hurtling over the side; acting as a good Samaritan, Jack climbs down and discovers two passengers, dead or dying. Plastic-wrapped stacks of $100 bills and other clues tell Jack that the van was transporting Mexican cartel money, probably for laundering. Believing he’s left no evidence behind, he works out a careful plan to safely retrieve, store, and launder $120 million with the help of his lawyer, Henry Berman, totally loyal because it was his son Jack saved from the pedophile. In the Caribbean, whose offshore banks will discreetly take large cash deposits, Jack will start a cover business—perhaps in private charter security. He’s set to make a better life for himself and his daughters—except his luck again turns bad. The cartel wants its money back and a ruthless killer is soon on Jack’s trail. Meanwhile, Ray Cruz, a DEA undercover investigator, becomes embedded with the cartel bigwig whose cash was in the van, and a Caribbean figure plays a double game. When Jack’s family is put in danger, he must use all his skills to tip the balance of luck again in his favor. Thomas (The Kingdom Shall Fall, 2017, etc.) offers a great hook in this well-plotted tale—the windfall that might be too hot to handle. The details of getting, storing, and laundering the money are compelling, and the author thinks through what it would take. Dialogue and police/military elements are also well handled, with a strong air of authenticity. For example, when Jack must undertake a military-style mission, a friend explains the weaponry: “With the fucking kick and impact expansion of the hot 7.62 NATO 175-grain hollow-point round this bitch fires, close is all you’ll need.” The pace is slowed down somewhat by attention to inessential facets or logistics, as in this passage featuring Felix Brillo, a cartel member, and Ray: “After getting Felix situated in the rear seat with his seat belt on, the pilot stored their bags in a small compartment and told Ray to join him in the front.” And at times, the plot relies too much on events extremely convenient to Jack or on coincidence (including one involving a financial matter).

A complex, multilayered thriller that sometimes overly depends on coincidence.