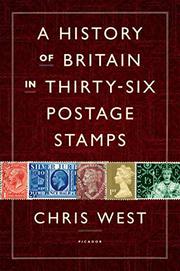 A HISTORY OF BRITAIN IN THIRTY-SIX POSTAGE STAMPS

A philatelic journey through Old Blighty, suitably geeky at moments, though not without a robust nostalgia for empire and better days.

Cambridgeshire-based writer West (Perfect Written English, 2008, etc.) uses postage stamps—a British invention, dating to the “penny black” of 1840—as a lens to view the larger picture of British history. Sometimes the connections are loose but meaningful: It’s really just by happenstance that the “three halfpence red” of 1870 was issued in the year that Charles Dickens died, but nonetheless, that allows West an entrée into the sprawling life of London (with its several-times-daily mail delivery) well along in the Victorian era, a time that, coincidentally, opens with that penny black. It’s no accident that West closes the book with a stamp bearing the profile of another monarch, the mildly gazing Elizabeth II as depicted on a first-class stamp of 2012; if there’s a difference, it’s that the Victorian era was a forward-looking, optimistic one, while ours is a time when Britons might wonder whether “these little islands off the coast of Europe [are] really still First Class.” As West notes by way of answer, Britain has survived innumerable crises, so there’s no reason to suppose that the answer has to be no. The author ventures a few words in favor of Margaret Thatcher, who “understood something that most politicians since the war have forgotten, that without sound currency and a vibrant entrepreneurial Wealth Machine there is little for the state to spend, even on the wisest projects.” Otherwise, apart from a few favorable but not jingoistic notes on the empire, West keeps the politics low and the history high, serving up lightly worn and often entertaining tales of the past.

Stamp collectors and Anglophile history buffs alike will enjoy this book—and for the reader who’s both, it’s a sure bet.

OUR LIVES, OUR FORTUNES, AND OUR SACRED HONOR
by Richard Beeman
Nonfiction