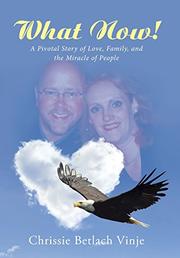 A Pivotal Story of Love, Family, and the Miracle of People

A debut memoir that depicts the journey of a woman fighting for her husband’s life after he was hospitalized for an aggressive brain tumor.

On St. Patrick’s Day 2008, Vinje was thrown into a state of shock after she got a phone call while waiting in line at the grocery store. Her mother-in-law told her that her husband, Tom, had been in a car accident and had wandered away from the scene. The author returned home to find Tom chatting casually with their neighbors as if nothing much had happened. But the next morning, he was difficult to wake; later, he wouldn’t leave the couch and was throwing up bile. Vinje and her mother-in-law decided to take him to the hospital, where he was quickly put into intensive care and given a CT scan. But what they and the doctors thought were symptoms of a concussion were actually symptoms of an aggressive brain tumor. Over the next seven months, Vinje, the couple’s family members, and an enormous number of their friends and neighbors convened with love and prayer on a blog called The CaringBridge to try to bring hope to the devastating situation. Although Vinje did everything in her power to bring her husband back to health, she was forced to slowly accept the reality of the situation and face her worst nightmares. This gripping book tackles the heavy subject matter of watching a spouse deteriorate due to terminal cancer. Although it’s a common theme for memoirs, Vinje’s stands out because of its unusual narrative structure: it’s almost entirely composed of journal entries from her perspective and from those of many other people who loved Tom. These entries, written on The CaringBridge as Tom was struggling in the hospital and then after his death, speak with immediacy—particularly in earlier entries, as they express heart-wrenching hope that he will survive. It’s hard to read in parts, knowing that Tom will succumb to his illness, and the infallible optimism begins to read as an unwillingness to accept the grave situation. However, the memoir offers hope in showing how Vinje created a community of grieving, healing, and remembrance, sticking to her mantra that “Bad things happen fast; good things take time.”

A heartbreaking yet hopeful book about the tragedies that bring people together, recommended for readers dealing with the loss of a spouse or other loved one.