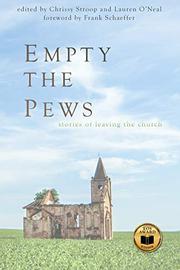 Stories of Leaving the Church

A timely collection of essays by a diverse group of people who’ve left the religious right.

This Eos Award–winning book features an assortment of written works from men and women who grew up attending fundamentalist and evangelical Christian churches but eventually went their own way. The book should be especially praised for its inclusion of a wide range of perspectives. The authors of the nearly two dozen essays here include multiple New York Times-bestselling writers, popular bloggers, artists, and academics; they include white men, feminists, African Americans, members of the LGBTQ community, Protestants, and Catholics. The book’s debut editors are at the vanguard of the bourgeoning “exvangelical” movement on social media; Stroop created the viral Twitter hashtags #EmptyThePews and #ChristianAltFacts, and O’Neal co-hosts the “Sunday School Dropouts” podcast. The book’s foreword is by Frank Schaeffer, the son of Francis Schaeffer, an ideological founder of the modern-day religious right and an evangelical icon from the 1970s through the ’90s. Each essay addresses what the younger Schaeffer calls America’s “generational exodus from toxic Christianity” from the perspective of former members. Although many of the authors here are currently atheists, others found spirituality in Eastern spiritualism or in more liberal interpretations of Christianity. The collection’s opening section, “Purity Culture, Sexuality, and Queerness,” is perhaps its most damning, featuring the stories of abuse survivors, gay people, and other victims of conservative Christians’ sexual repression and hypocrisy. Boy Erased author Garrard Conley’s essay, “Land of Plenty,” on his endurance of gay “conversion therapy,” is particularly poignant. Not all of the essays, though, center on traumatic experiences as the factor that led their authors to leave the church. Peter Counter’s contribution, “Saint Tornado-Kick,” for example, intriguingly shows the gradual transition of a sincere Catholic teenager away from the faith of his parents after taking up karate lessons. Overall, this is a profound, well-written collection that will appeal not just to “exvangelicals” and other critics of the religious right, but also introspective fundamentalists who seek explanations for their dwindling numbers.

An incendiary but profoundly moving deconstruction of conservative Christianity.