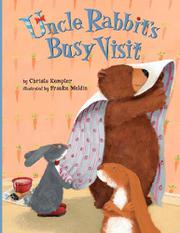 Can the bustling Rabbit and the laid-back Bear share a house? Wally, a big brown bear, is working in his vegetable garden when he gets a letter from his (wife's) Uncle Rabbit, announcing an imminent visit. Wally and his rabbit wife Mae make haste to clean up. Uncle arrives with two large trunks and lots of ideas about making over Mae and Wally's home. He rearranges the furniture, changes the wallpaper and makes new silk curtains, just for starters. It's too much for Wally, who angrily tells Uncle Rabbit that he hates all the changes. With admirable politeness, Uncle Rabbit says that it's time for him to leave. Wally's attempts to apologize don't change his position; he calls a taxi and departs, but not before offering to return and sort out Wally's garden. "You need a little variety," he declares. Kemper's clever premise is undermined by a vague and unsatisfying ending; Weldin's soft illustrations have more warmth than the story. (Picture book. 3-6)