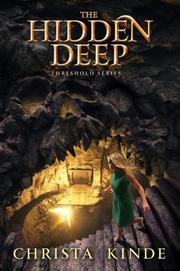 From the Threshold series, volume 2

This second volume in the Threshold series stands, as did the series debut, with one foot in the clouds—amid an epic battle of angels and demons—and another planted firmly on the Earth, entrenched in the ordinary lives of the Pomeroy family.

In this relatively slow-paced sequel, 14-year-old Prissie Pomeroy learns that an angel has been kidnapped right from her family’s apple orchard. The other angels she knows—some of whom are members of her community in human guise—are trying to locate and rescue him. The angels are also concerned with protecting Prissie; she is important to the mission of the angels in some way and is in serious danger, but the nature of her role is not made clear. Scenes of angels and occasionally demons going about their mysterious, ethereal business are woven into the more commonplace story of a young woman dealing with complicated friendships and family dynamics. While the angels-and-demons subplot is a bit baffling, the more realistic elements of the narrative, such as the scenes that describe Prissie’s struggles with jealousy of the time and attention her father devotes to his bakery assistant, are well-executed and resonant.

A slow but ultimately successful installment in a serviceable Christian fiction series aimed at middle-grade readers.