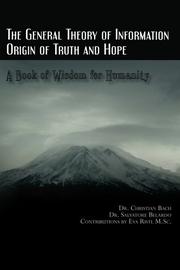 THE GENERAL THEORY OF INFORMATION: ORIGIN OF TRUTH AND HOPE

Authors Bach and Belardo use Einstein’s Theories of Relativity and quantum physics to establish a philosophical paradigm they say will lead to hope and happiness for mankind.

The book opens with a rather perplexing prologue, preface and introduction. These sections confound, in part, because of an inherent paradox. They continually use the terms “unthinkable” and “unspeakable,” without explaining what, precisely, is unimaginable or unsayable. Fortunately, clarity rules once the science begins—no small task considering the subject matter. It turns out that the unthinkable, unspeakable things are the implications of the Theories of Relativity, constructs that thwart our brains and mouths. This is dense stuff, but basically, quantum experiments have demonstrated that two particles can confer information instantaneously across any distance and time frame. Since this violates Einstein’s Theories of Relativity by exceeding the speed of light, scientists, including Einstein, began a debate that rages to the present. Without getting into that argument, which is not really covered in the book, the authors posit that relativity is not being violated. Einstein’s famous equation, E=mc2, they say, demonstrates that at the speed of light, all of space-time equals zero and in fact all information of the past, present and future, equals infinite and, therefore, exists as a single inseparable point, a realm they call nospacetime, nonlocality and an information singularity. Since all things are one in nospacetime, the information has not traveled any distance at all. The authors then attempt to make the leap to philosophy by postulating that somehow the knowledge of this oneness of all things on the nonlocal level will in itself change mankind’s wicked ways. As with most leaps from science to values and beliefs, their assumptions are not necessarily on a par with their scientific ones.

Not an easy read, but for those with at least some background in quantum mechanics and relativity, it should prove both fascinating and enlightening on a scientific level, even if the promised salvation of the human race falls somewhat short.