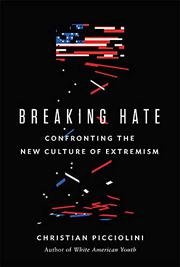 “The delicate fibers of America’s fabric have been ripped to shreds by extremism,” writes Picciolini, who recounted his personal transformation in White American Youth (2017). His road to reform informs his latest book, which is partly autobiographical yet also drawn from the profiles of people who have fallen prey to the same net of hate and radical racism that had ensnared him as a teenager. In 1987, Picciolini, who felt lost as a young teenager, immersed himself in the neo-Nazi white supremacy movement and helped found two white supremacist punk bands. He openly confesses that once he met and engaged with the actual objects of his hate and rage, he couldn’t justify or reconcile that hate any longer and denounced the movement. This lesson is just one of several approaches the author believes are proven deterrents against indoctrination with radical extremist groups. The author explores the ways violence integrates itself into personal histories of bigotry or intolerance and calls out racists by exposing their “protective armor” of agony, shame, fear, and insecurity, beneath which lies a “fractured human.” Delving deeper, Picciolini chronicles the evolution of several former extremists he has counselled—e.g., Kassandra, a former white nationalist kidnapped and radicalized by her virtual “online Nazi boyfriend,” a case that became one of the most challenging the author ever faced. He also tells the stories of Daniel, a child born into poverty and emotional abuse, and several post-combat, trauma-addled military veterans who fell “into the insidious arms of hate.” As an outspoken advocate who has denounced racism and resolved to “repair the harm I once caused,” Picciolini sets an instructive example for those questioning their own extremism. As he notes, “this book is my testament to how important empathy, compassion, and self-reflection are.”

An inspirational and refreshing book for anyone seeking to get out of their cycle of hatred and anger.