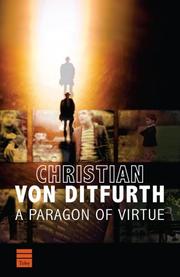 A PARAGON OF VIRTUE

Irascible Josef Maria Stachelmann has been laboring as a professor in Hamburg but has yet to complete his post-doctoral work, a task that should secure his tenuous position in the history department at the university. His area of expertise is the history of the Buchenwald concentration camp. Meanwhile, over the past few years, three members of the family of Maximilian Holler, a prominent businessman, have been murdered. Holler is seemingly upstanding and morally squeaky-clean, but it turns out he covers up a dark past. Chief investigator in these murders is Oskar “Ossi” Winter, head of Hamburg’s murder squad and an old college buddy of Stachelmann. As the investigation gets more complicated, Winter calls on his friend to provide historical context, for it appears that, back in the 1930s, Holler’s father had been involved in a plan—legal but incontestably immoral—to buy Jewish properties at deflated prices. Implicated in this scheme were the local Hamburg police, who eased the way for businessmen like Holler’s father—and it turns out that Stachelmann’s father had also played a role in this intrigue. What’s unclear to Winter is who’s been bumping off Holler’s family. It’s obviously an act of revenge, but is it being carried out by businessmen that Holler has been putting the screws to? Or by an old victim of the machinations of Holler’s father? Tension builds as a black Mercedes deliberately runs over a policewoman involved in the investigation, and a mysterious man with long white hair pushes Stachelmann onto a train track to try to keep him from uncovering the core of the mystery.