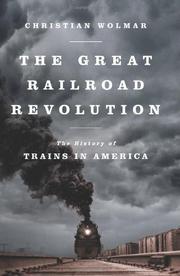 The History of Trains in America

“I realize that it is somewhat cheeky of me, a Brit, to try to write a concise history of American railroads,” he writes early on. Cheeky, perhaps, but as he also writes, an outsider’s perspective on what has been seen as a consummately American adventure can be helpful—particularly since world history isn’t without comparable ventures, such as the building of railroads across Siberia and Africa. Yet, as Wolmar rightly notes, the railroads played a key role in uniting the United States, even if one of the signal moments of railroad history wasn’t quite all it was cracked up to be. That is, the building of the transcontinental line, as commemorated by the driving of a golden spike in Utah in 1869, was a symbolic gesture of sorts; it wasn’t until a bridge was built over the Missouri River three years later that a person could truly travel across the continent without leaving the rails. Further, “there never has been a single railroad company stretching from East Coast to West.” All of this does nothing to diminish the accomplishment of introducing the new technology of the railroad and extending it over thousands of miles in the space of just three decades, work carried out by millions of man-hours of hard labor but planned out and capitalized on by men whose names are bywords today, such as Carnegie, Mellon and Stanford. Wolmar acknowledges the “corruption, cheating, purloining of government funds, reckless building practices, and astonishing greed” that went into the making of the transcontinental system, but his purpose is less political than historian Richard White’s sweeping condemnation of the robber barons of yore in Railroaded (2011). Wolmar, it seems, has no purpose other than crafting a critical but admiring study of a triumph of engineering, and in this he has succeeded.

A solid and, yes, concise look at the railroad’s past, with a rousing call at the end for a new and improved rail system to carry the nation forward.