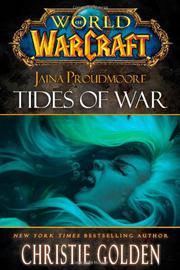 From the World of Warcraft series

Golden (Star Wars: Fate of the Jedi: Ascension, 2011, etc.), who has also previously written novels set in the Star Trek, Star Wars and Starcraft II universes, returns with another World of Warcraft entry.

Set in Blizzard Entertainment’s World of Warcraft massive multiplayer online role-playing game world, this novel largely follows Lady Jaina Proudmoore, a human sorceress and the leader of the city of Theramore. As the novel opens, it is discovered that the Focusing Iris, an ancient magical artifact, has been stolen from the blue dragons by unknown enemies. The leader of the dragons, Kalecgos, in his humanoid form, approaches Jaina to help recover it, claiming that nothing less than the fate of the world of Azeroth is at stake. Meanwhile, the orc Garrosh Hellscream, leader of the Horde, has a plan to attack the Alliance and specifically, to target Theramore as an early step in an all-out war of conquest. Jaina gathers allies to aid in her city’s defense, but Garrosh has a horrific surprise planned that will change everything. The novel, as part of a long-running fantasy series, assumes some back story knowledge on the reader’s part, but attentive newcomers should have relatively few problems getting their bearings. Though the prose style tends toward the verbose at times, and some names (Bloodhoof, Sparkshine, a battle-ax named Gorehowl) may be distracting to the uninitiated, the plot and action are straightforward. The grand and sweeping battle sequences in particular—featuring rampaging molten giants made of rock, a wide range of other creatures and plenty of magic—will likely satisfy World of Warcraft newbies and aficionados alike.

A well-crafted installment in the World of Warcraft saga.