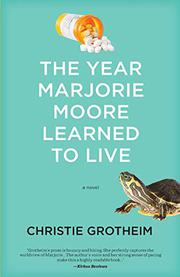 A debut novel unspools one year in the life of a disillusioned and self-destructive woman in a Dallas exurb.

Marjorie Moore is not satisfied. But this is hardly a new development. According to her parents, when she started learning to talk, Marjorie’s first word was “more,” though this might have been due in part to their negligent style. Now, age 40, she has a husband and two kids and lives in an “incomplete house, in an incomplete neighborhood…in Prairie Mound, a suburb of a suburb, near the suburb where she had grown up—but farther away from, rather than closer to, Dallas itself.” She drinks a lot of wine and pops Ambien and Xanax, either because she’s bored or addicted to them (she isn’t quite sure). She works as a receptionist at the local hospital, which makes it easy to get the pills. She’d love to go to Paris, though she finds that her compulsive shopping has been eating up a lot of the family’s financial resources. Really, it only makes sense for her to start selling pills to her friends as a way to make extra cash, and it certainly makes her life a little more interesting. So does renewing an old, flirtatious acquaintance with Stephen Singleton, a friend from high school whom she always had a bit of a crush on. As the months pass, her various secret behaviors become more and more serious, and the reasons that Marjorie has for doing them become less important than the fact that they may cause her to lose everything. Grotheim’s prose is bouncy and biting. She perfectly captures the worldview of Marjorie, who is slightly aware of her self-deluding tendencies (though not as aware of them as readers): “She would have preferred being called Marjorie, which was her given name and sounded sophisticated, like royalty, she thought. Resentful of her parents shortening it to Margie, a fatty’s name when in fact she was not, she had made better choices for her own kids.” The author’s voice and her strong sense of pacing make this a highly readable book even if the subject matter remains well-trod territory.

An entertaining, if familiar, account of a midlife crisis in America.