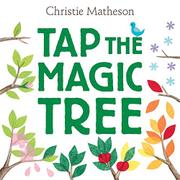 Matheson invites readers to take an apple tree through a seasonal round using taps and page turns in place of touch-screens.

“There’s magic in this bare brown tree. / Tap it once. / Turn the page to see.” Making the resemblance to a tablet app even more apparent, the tissue-collage leaves, flowers and fruits that grow, mature and fall in succession on the scaffolding of branches “appear” following cued shakes, pats, blown breaths, claps and gestures as well as simple taps. The tree, suspended in white space on each spread, is all there is to see (until a pair of nesting bluebirds fly in at the end)—so that even very young children will easily follow its changes through spring, summer and winter dormancy to a fresh spring. Like the print version of Hervé Tullet’s Press Here (2011), from which this plainly takes its inspiration, the illusion of interactivity exercises a reader’s imagination in ways that digital media do not. Still, the overall result is more an imitation of an app than a creative use of ink, paper and physical design.

A universal theme, developed in an unusually clean, simple presentation…and, at least, with no need for batteries.