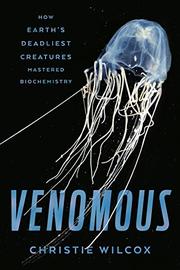 How the creatures that embody some of mankind's deepest fears use toxic substances to defend themselves against predators and to prey on the creatures they eat—and why this is important to us today.

“There are two kinds of venom scientists,” writes molecular biologist Wilcox: microbiologists interested in studying the molecular complexities of toxic compounds and their pharmaceutical potential and those who are attracted to the adventurous pursuit of the animals who secrete them. The author places herself in both camps. “I…got into the study of venoms because of my love for the animals,” she writes. “But the more I learned about the intricate complexities of the chemical cocktails these animals produce, the more intrigued I was by the venoms themselves and the more I was drawn to the most dangerous of species.” Our preoccupation with these creatures is deep-seated, as demonstrated by the limestone pillars of a 10,000-year-old Turkish temple that are decorated with a host of venomous creatures, including spiders, snakes, and scorpions. Furthermore, writes the author, “fear of many of them is innate in humans, found even in the youngest babes,” and tens of thousands of people are killed each year despite the existence of anti-venoms—especially in poorer areas where access to treatment facilities is limited. Wilcox describes the debilitating pain she experienced after being stung by a poisonous sea urchin while shepherding schoolchildren on a field trip to study marine life. She admits that the frisson of danger is one of the appeals of studying these creatures in their natural environments. More significantly, she believes that there are “medical marvels…awaiting discovery in the deadliest of venoms,” including possible treatments for diseases such as HIV and cancer. The author concludes with a compelling message on the need for venomous animals, which are part of the biochemical riches with which our planet has been endowed.

Wilcox writes in a lively style, but the book is likely of greatest interest to those already drawn to the subject.