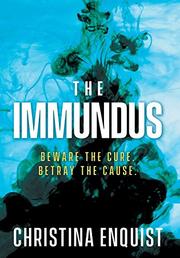 In this YA dystopian debut, a teenager must make hard decisions when she learns the truth behind a mysterious disease.

In 2828, after the genetic engineering that nearly killed all life, humans survive in the nation of Domus. Beneath the country’s dome, 12 genuses—walled cities—work to sustain humanity, still threatened from within by a disease called allagine and from without by the Immundus, rainbow-scaled humanoids who live outside the dome and often try to intrude. Because of this danger, all Domus citizens are trained fighters, practicing their skills from an early age. Nia Luna, 16, lives in a genus where Arlington, Texas, used to lie. She lost a good friend and her sister to allagine, which kills the young. Her mother left the family, and now Nia lives with her emotionally distant father, a scientist. She’s at the age when teens graduate and are recruited into companies based on their skills and interests; Nia wants to become a geneticist and find a cure for allagine. Being recruited to Genesis, her father’s company, seems to set her on the right path. Nia’s emotional life is complicated when Eric Marcello, her best friend, discloses his romantic interest, but this news is overshadowed when she discovers startling truths about allagine, the Immundus, Genesis, and her own father. With the help of a resistance group, Nia resolves to carry out a bold, possibly world-changing plan. In her book, Enquist uses many elements familiar from YA dystopian fiction, but her future history and science are fairly well thought out. She provides some intriguing reflections on evolution and genetic science. Some references, though, don’t sound very 29th century (individual car ownership; toothpaste from a tube), and others could be fresher, such as the hoary grain/chicken/fox puzzle. Nia is almost comically overwrought in the somatic manner common to YA: “My intestines play Twister with my organs, sending spasms along my spine.” Still, she’s conscientious, brave, smart, and compassionate—a nicely balanced heroine.

Despite a few flaws, a well-paced sci-fi story with excitement, emotion, and character testing.