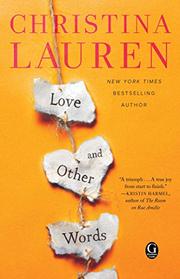 LOVE AND OTHER WORDS

Eleven years ago, he broke her heart. But he doesn’t know why she never forgave him.

Toggling between past and present, two love stories unfold simultaneously. In the first, Macy Sorensen meets and falls in love with the boy next door, Elliot Petropoulos, in the closet of her dad’s vacation home, where they hide out to discuss their favorite books. In the second, Macy is working as a doctor and engaged to a single father, and she hasn’t spoken to Elliot since their breakup. But a chance encounter forces her to confront the truth: what happened to make Macy stop speaking to Elliot? Ultimately, they’re separated not by time or physical remoteness but by emotional distance—Elliot and Macy always kept their relationship casual because they went to different schools. And as a teen, Macy has more to worry about than which girl Elliot is taking to the prom. After losing her mother at a young age, Macy is navigating her teenage years without a female role model, relying on the time-stamped notes her mother left in her father’s care for guidance. In the present day, Macy’s father is dead as well. She throws herself into her work and rarely comes up for air, not even to plan her upcoming wedding. Since Macy is still living with her fiance while grappling with her feelings for Elliot, the flashbacks offer steamy moments, tender revelations, and sweetly awkward confessions while Macy makes peace with her past and decides her future.