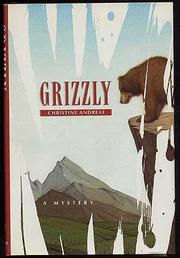 Second-novel blues for the talented Andreae (Trail of Murder, 1992), who unconvincingly packs English Renaissance scholar Lee Squires off to Montana again for another stint as a backwoods cook. This time, she's fixing grub for a dude ranch operated by Dave and Trudi Fife but owned—lock, stock, and 20,000 acres—by Dave's kid brother Mac, a hell-raiser turned environmental activist and founder of the Sacred Paw Institute. Cash poor, Dave's banking on impressing a Japanese contingent looking for a working ranch it can use as a corporate playground. So he decides to keep it very quiet when Lee finds a month-old body minus arms, legs, head, and genitals. Dave breathes a sigh of relief when forensic X-rays indicate that the corpse is that of a grizzly bear—the story's neatest twist: ``With a bear, you can't go out and interview the guy he was drinking with the night before.'' But then a coy freelance reporter, who came sniffing around after the first killing, becomes the victim of a second, this time with a second grizzly as the leading suspect. Many pages and humane sentiments about animal rights later (the authorities kill the alleged perp), Lee confronts an unsurprising non-ursine killer (with a good mouthpiece, that poor grizzly could've made bail and been back in the woods in an hour). Lee is shrewd enough to make you wish she'd chuck her teaching job back in D.C. and come to Montana for keeps. But you could hibernate through a long winter while she gathers evidence proving what most readers will have assumed from the beginning.