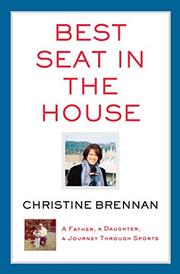 BEST SEAT IN THE HOUSE

A Father, a Daughter, a Journey Through Sports

Arriving well in time for Father’s Day, Brennan’s memoir moves with grace and precision through the details of her life as a stereotype-shattering sportswriter, crediting the life-coaching she received from her dad with teaching her how to go her own way.

Her account begins with childhood as a tomboy and stats geek, then moves on to what she self-deprecatingly calls her teenage “Frankenstein” phase, playing sports before girls’ athletics had institutional support, and finally to her rapid though not easy ascent into the upper echelon of sportswriters. (She was the first woman to cover a football teams from its locker room.) Brennan’s narrative generally stays close to home and to the man who taught her the fundamentals. Dad, who once tried out for the Cleveland Browns, had the sense to let his children be nothing but themselves. If his daughter developed an obsession with the Toledo Rockets football team and the minor league Mud Hens, then so be it. And if she wanted to play sports, he would be close at hand, either on the field with her or watching from the stands. In the moderately Republican Brennan household, basic fairness mattered most; the word “feminist” wouldn’t have been used, since nobody there had much use for labels. The author, naturally, is a robust defender of Title IX equity, and she praises those who have given girls worthy role models in sports: Billie Jean King, the Women’s World Cup team, Annika Sorenstam.

And Brennan herself makes a fine role model, as a lucid, evenhanded journalist.