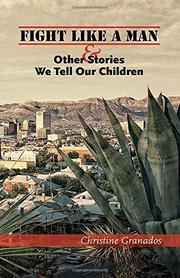 FIGHT LIKE A MAN AND OTHER STORIES WE TELL OUR CHILDREN

A novella and seven stories that shine a light—sometimes harsh and glaring—on love and family relationships in the Hispanic community of El Paso.

The title gives its name to the novella and introduces us to the kinds of complexity that will shape all the pieces in the collection. Moníca Montoya, the narrator, finds herself pregnant, but not with her husband Sal’s child. The father, ironically, is a man named Regie, whose son has been bullying Moníca and Sal’s son, Gabe. Moníca goes to Ana Jurado, an herb specialist whose tea is supposed to create a “natural” abortion, but she remains skeptical that the brew will work. And if this isn’t enough on her plate, she’s also dealing with what to do with the ashes of her father, Vicente, a seductive wastrel who somehow balanced having two families, one in Mexico and one in El Paso. Moníca uses her half sister, Bernie Gomez, as a confidante during these personal trials, which include Moníca’s continued sexual involvement with Regie as well as with a younger man. And then Sal is suspended from work for sexual harassment—or for what he terms “flirting.” Although all the plot elements border on soap opera—or perhaps telenovela—Granados has an ear for crisp dialogue and particularly for engaging opening sentences (“There is no way to look sexy carrying a fifty-quart pot of tamales” or “Every time Jim Burkett caressed Anita Guerra’s arm she had to suppress her desire to flinch”). And while the stories can be dark, the characters remain fundamentally defiant and hopeful despite distressing odds.