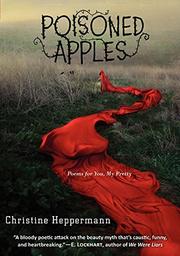 Poems for You, My Pretty

A slim volume sharp as knives.

Lacing traditional fairy tales through real-life perils, Heppermann produces short poems with raw pain, scathing commentary and fierce liberation. There’s no linear arc; instead, girls buck and fight and hurt. One poem takes the expression “You Go, Girl!” literally, banishing anyone with “wetness, dryness, tightness, looseness, / redness, yellowing, blackheads, whiteheads, the blues.” In a structure heartbreakingly inverted from “The Three Little Pigs” (and nodding to “Rumpelstiltskin”), one girl’s body goes from “a house of bricks, / point guard on the JV team” to “a house of sticks, / kindling in Converse high-tops,” until finally “she’s building herself out of straw / as light as the needle swimming in her bathroom scale. / The smaller the number, the closer to gold.” She’s her own wolf, destroying herself. Sexual repression, molestation and endless beauty judgments bite and sting, causing eating disorders, self-injury, internalization of rules—and rebellion. A hypothetical miller’s daughter says, “No, I can’t spin that room full of straw into gold. / …. / No, I can’t give you the child; / the child will never exist.” Gretel’s act of eating will literally rescue Hansel; Red Riding Hood reclaims sexual agency, declaring, “If that woodsman shows up now, / I will totally kick his ass.”

Full of razors that cut—and razors to cut off shackles: a must.