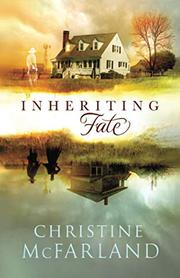 In this debut novel, a damaged woman seeking to rebuild her life gets drawn into a historical mystery.

McFarland’s protagonist, Cassie McAllister, survived a vicious attack by her ex-husband, James Lancaster, but still bears the physical and mental scars. Since her parents’ recent deaths in a car accident, Cassie is also haunted by a woman’s voice saying “Save her.” Her self-prescribed therapy is to move into and repair an Idaho farmhouse that she inherited. But the home has ghosts, both figurative and literal. In the attic, she discovers the diary of Annie McDonald and gets pulled back into her 1890 world. When Cassie returns to the present, she meets the ghost of Carrington Chambers, Annie’s future husband. Carrington was hung for Annie’s murder, a crime that he didn’t commit. He is a restless spirit who has remained at his former home, refusing to cross over until he finds out the truth about what happened to Annie. He needs Cassie to read Annie’s diary and go back in time to discover the truth about her death. Cassie eventually agrees to help Carrington with his mission despite threats that include Lancaster’s release from prison. In this first installment of her Fate series, McFarland has crafted an admirable heroine in Cassie, who is willing to risk her own life to help Carrington gain some closure. Carrington is also a well-developed character, a twice-convicted murderer in his own time who cares for Cassie’s well-being in the present. This novel manages to be both an intriguing romance and a well-structured mystery, as Cassie tries to uncover who are the friends and foes among Carrington’s acquaintances. But the tale never explains how Carrington manages to maintain a solid physical presence in modern times only to fade away as he gets closer to completing his task. But thanks to the author’s fast-moving narrative, readers are likely to overlook this quibble. What’s more pressing is the increasingly close relationship between Cassie and Carrington, though it seems doomed to be short-lived if they succeed in solving Annie’s murder. What results is a bittersweet and engaging story as Carrington pursues vindication.

An enjoyable tale of reclamation through time travel.