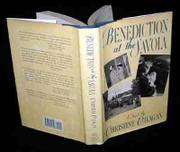 BENEDICTION AT THE SAVOIA

An ingratiating first novel that centers on the growth of a young woman whose mores and judgments were shaped within the solidly Irish-Catholic blue-collar neighborhood of Jackson Heights (20 minutes to Manhattan by subway). The story of Delia Mary Delaney, nÇe Rooney—set in the early 60's and before—pops and hums with a multitude of depth-sounding recognitions so acute in sound and sight that the reader is home in the Heights after a few pages. When 19-year-old Delia became pregnant by huge, handsome Maurice Delaney—who was going to marry her anyway—Mae Rooney had to tell her husband Denis, Delia's volatile father. Denis kicked her and kicked her—after all, she'd disgraced them—but Denis (one of 12 children of a wild woman in Ireland) died just before Delia's baby Maureen was born. Maurice, now a cop, is a drinker like Denis, but he's a good man. There are flashbacks to the wedding (tacky, loving, hilarious), the first three months of a screaming baby—the frenzy and aching love, devotions at the altar of housework—and, in the apartment downstairs, there's also Mae, that ``Queen of Saints,'' devoted mother and grandmother, crazily prejudiced, loudmouthed, ever-scrubbing, ever-cooking, ever-present tyrant. Brothers (both fallen away from early promise), friends, neighbors come into focus, along with disastrous trips away—cold and desertion in Manhattan; a beer-soaked Maurice, and anger at the beach. It is a tragedy as close as her heart that dooms, and then saves, Delia for a new start in one day of shocking laughter and joy. A remarkable evocation of a tight little island peopled by pre-Vatican II Irish and a younger generation, unlike their mothers, brogue-less, but ``not-quite ready to move on.'' From the fly-specked windows of the Shamrock Bar, in the ``damp air under the el,'' to the cemetery opposite Arthur's Discounts—it's real and warms the heart.