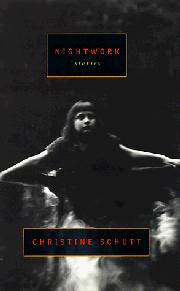 A debut collection made up of 17 stories (or, in some cases, slivers of story) told in voices flattened by despair. The narrators here are mostly nameless, and the uneasy territory of their subject matter cannot readily be labeled. In the opening piece, ``You Drive,'' a grown daughter and her father cross the boundaries of any usual parent-child relationship as they sit in a car, sharing secrets, kissing and memorizing the smell and texture of one another's skin. In ``What Have You Been Doing?,'' it's a mother and son who kiss: ``She was out of practice and he wanted practice. . . . In the middle of rooms she obliged, in her bedroom, his bedroom, a kissing done standing, her hands on his shoulders, his not quite on her waist, heads tilted, mouths open.'' Another mother, in ``Teachers,'' tells her daughter details about her lover while the girl yearns to get away, begging to be allowed just to go off to school. The spareness of Schutt's prose, in combination with her elliptical storylines, can make certain pieces (notably ``Giovanni and Giovanna'' and ``His Chorus'') difficult to decipher at all. But when she works with more accessible themes, the results are powerful, as in ``Daywork,'' where two adult daughters guiltily clean out the attic of their mother's house as she lies dying in the hospital, and ``To Have and To Hold,'' as a spurned wife acts upon her anger and grief in her tiny and terrifyingly tidy kitchen. Schutt is good at small, sharp moments, and she chooses words with the care of a poet. But effective as some of these tales are, others feel fragmentary, incomplete. Taken all together, they're finally overwhelming in the uniform grimness of their point of view. Razor-sharp writing in stories sliced a little too thin—and admittedly close to the bone.