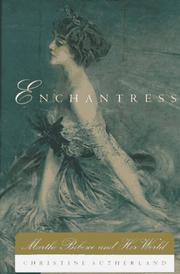 Marthe Bibesco and Her World

Too much like her heroine, author Sutherland is so seduced by power and glamour that she inflates her subject's literary and historical significance. Sutherland (The Princess of Siberia, 1983; Monica, 1990) has spent most of her career chronicling the lives of oft-forgotten, aristocratic European women who have played a role in political and historical events. Her latest effort concerns Marthe Bibesco (18861973), Wallachian princess, author, confidante of countless heads of state, and jet-setter par excellence. From an early age, Bibesco was surrounded by men and women of power, money, and standing; she spent much of her adult life pursuing this vanishing troika in the postWW I decades. Daughter of the Romanian minister of foreign affairs, she entered an arranged marriage to a rich rake, and the two proceeded to take lovers and lead largely separate lives. Moving between Bucharest and Paris, her various country homes and palaces, and her various European watering holes and vacation destinations, Bibesco took up writing to fill an emotional void resulting from a loveless marriage, family deaths and suicides, and a general malaise caused by the end of aristocratic rule. After WW II she was even reduced to earning a living by writing to support her family in exile. At least this is the picture as presented by Sutherland. The problem is that Sutherland narrates these events without hazarding any ideas about Bibesco's literary or intellectual evolution. To her credit, she soberly dismisses some of Bibesco's many literary works as failures. And she argues that Bibesco could be seen as an early proponent of European unity. However, if this biography conveys one clear message, it is that there is a vast difference between Bibesco's aristocratic, conservative notions of Europeanism and more modern, egalitarian, and democratic views. Here historical events appear only as backdrops to the real focus of this disappointing narrative—designer clothing, fancy cars, Europe's haut monde, and jaded royal circles. (photos, not seen)