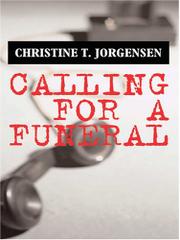 CALLING FOR A FUNERAL

A stalwart, more serious heroine from the creator of Stella the Stargazer (Dead on Her Feet, 1999, etc.).

When her college friend Helene Foster offers her a job in Denver, Francie Starzel jumps at the chance to get away from her family, whose business is crime. But when Helene suddenly fires her and then turns up dead in her trunk, Francie fears she’s headed for jail. Handsome Detective Dominic Wolfe warns her she’s the prime suspect. Though she’s attracted to Wolfe, her family has trained her to never trust the police, so she investigates on her own. At Techlaw Inc., the wife of Helene’s partner Harris Bruckner was having an affair with Helene’s husband Stewart, and the company lawyer may have been cooking the books. Francie’s predecessor, Julia Orbach, drove off a cliff, and her aunt Rosie, a cleaning woman at Techlaw, is sure she was murdered. Just to liven things up, Francie’s soon-to-be-adopted son Mac purloins her gun and accidentally discharges it at a pre-funeral reception. Francie’s part-time telemarketing job gives her time to dig through Dumpsters in an attempt to recover missing computer files that might provide a motive for murder. But the hot water she’s in rises neck-deep when she discovers Rosie murdered. There’ll be several more hair-raising adventures before the truth is revealed.