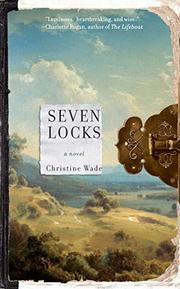 As the Revolutionary War looms, a colonial wife struggles to survive after her husband wanders away.

The unnamed principal narrator of Wade’s first novel was born into privilege, the daughter of a wealthy merchant and shipbuilder. Her mistake is her marriage to a feckless man who uses her dowry to buy a remote farm at the foot of the Catskills. After fathering two children, a son (also unnamed) and a daughter, Judith (a secondary narrator), the husband grows increasingly recalcitrant and balks at doing any work. The wife takes up the slack with her Dutch work ethic, but her nagging (the local townsfolk will gossip) finally drives the husband off. Leaving one day in a huff with his dog, Wolf, the husband disappears into the vast wilderness surrounding the settlement. The dog returns alone, and a search by neighbors proves fruitless. Finding that she is pregnant, the woman enters the woods to seek an abortion remedy from Indian women. For the next seven years, she works and manages the farm with only her two children as helpers. She trades butter and cheese at the village market, but no one buys her sausage. Gradually, her children learn the reason she is ostracized by the village: Not only is she a reputed shrew, she is rumored to have murdered her husband and ground him into wurst. Judith, eager for knowledge, is the protégée of the local schoolmaster, while her brother grows increasingly withdrawn. When war comes, the small family scatters in three directions. The last section of the novel, narrated by Judith, who has been far more fortunate in her marriage, skirts direct revelation of what befell her father. According to Wade’s afternote, the narrative is the back story of certain Washington Irving tales. Her decision, however, to substitute Judith’s generalized observations on mythmaking and legend for a detailed explanation of the father’s disappearance, is unfortunate.

Still, a spellbinding depiction of the hardships faced by a woman fighting her own war of independence.