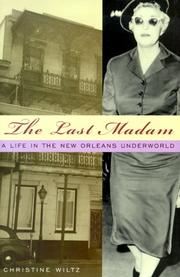 A Life in the New Orleans Underworld

Wiltz’s biography of Norma Wallace, proprietor of New Orleans’s longest continuously operating bordello, exposes the madam’s sordid tricks of the trade, yet somehow manages to strip the most titillating frills away from her story. Wallace, learning early in life that sex could pay for many things she otherwise couldn’t afford, began her life of prostitution in Memphis at the ripe age of 14. With a savvy knack for self-preservation, she returned to her roots in New Orleans and established her own sporting house, beginning her celebrated career as a New Orleans sexual institution. The city’s richest families patronized her establishment, as did movie stars, foreign dignitaries, and local officials. With such a range of clients, Wallace gained access to all the town’s dirty secrets, making her more than a match for the many reform-minded district attorneys and mayors who hankered to shut her down. In addition to Wallace’s professional life, Wiltz (Glass House, 1994, etc.) depicts her subject’s search for domestic bliss with five husbands and many more lovers, including a former boxer punched nearly blind, a hit man for Al Capone, and a young Louisiana buck 39 years her junior who helped her try to go legitimate as the owner of a family restaurant. Wiltz also roams beyond Wallace’s professional and romantic affairs to spotlight her state’s infamously crooked politics, the licensed depravities of the French Quarter, and Wallace’s humorous attempt to realize a pastoral ideal in the backwoods amid a community of righteous citizens. Though using Wallace’s illustrious X-rated career to balance a wider range of Big Easy corruption should produce surefire pleasure, only the most ravenous consumers of brothel culture will stand for Wiltz’s cutesy wordplay (almost 20 percent of the chapter titles pun on “trick”) and pedestrian prose. The real shame here is that Wiltz dressed up her story so licentiously instead of borrowing more of Wallace’s own shoddy finery.