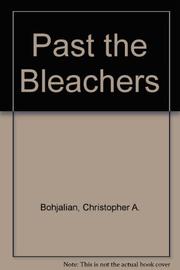 by Christopher A. Bohjalian

From the author of Hangman (1991) and A Killing in the Real World (1988), a tug-at-the-heartstrings baseball novel— authentically moving in places but, finally, too programmatically sentimental. A Vermont couple—Bill and Harper Parrish—lose their son Nathaniel to leukemia when he's only ten, and the process of grieving includes both ferocious lovemaking and a decision by Bill (a development officer at a local college) to coach the town's Triple A level Little League team, ``the level that Nathaniel would have reached'' in a year. Among the ten- and eleven-year-olds appears Lucky Diamond, a mute who writes on a notepad. The story of Lucky—apparently the son of a mountain logger—begins to overlap with flashbacks of Nathaniel (playing dice baseball with Bill in the hospital); job and coaching incidents; and the domestic healing taking place between Bill and Harper (she finally gets pregnant). We enter ``a 5 a.m. world of fathers without sons.'' Meanwhile, Lucky, who lives in a remote mobile home, doesn't seem to attend school. Bill, protective of Lucky, finally gives him Nathaniel's old glove when his glove is stolen; then, after a series of offstage accidents, Bill confronts the commissioner of the Little League, who knows something. What's discovered is that Lucky's real father was the pro ballplayer Ben Slaughter, who died in a car wreck and left behind a pregnant young lover. While all of these later revelations are a bit forced, Bohjalian cleverly works out the ending every reader will see coming from a mile away. Bill adopts Lucky. Harper has her baby, and the world is an almost perfect place. Bohjalian handles Little League and his Vermont milieu well enough, but this one's too predictable in its overall pattern if not in its particulars. Still, a good get-out-your-handkerchief read for ball fans.