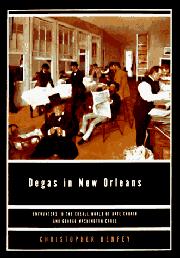 This lifeless account of Edgar Degas's 1872 visit to New Orleans unsuccessfully tries to link his artistic breakthrough with the city's Reconstruction-era social turmoil. Benfey (American Literature/Mt. Holyoke Coll.; The Double Life of Stephen Crane, 1992) claims the French painter's five-month sojourn with his mother's family ``is something of a legend in New Orleans.'' There's nothing legendary in Benfey's workaday account. A private man bent on being ``famous but unknown,'' Degas stayed indoors because his eyesight (which he fancied was failing) couldn't stand the intense southern light; he pined for black models but painted family members instead. Admitting the challenge posed by his ``notoriously secret'' subject, Benfey expands his critical field of vision to encompass New Orleans writers George Washington Cable and Kate Chopin—even though there's no evidence they crossed paths with Degas. Their work, obsessed with the enormous changes transforming New Orleans society in the Civil War's aftermath, is supposed to help us ``decipher the underlying meanings in Degas paintings and letters.'' Chopin gets top billing, but the largely forgotten Cable gets more ink, including a provocative but unsubstantiated suggestion that this creator of the archetypal ``tragic mulatto'' is the granddaddy of southern literature. Benfey, the first biographer to focus on Degas's American roots, adds valuable insight to the artist's work with his analysis of the effects American technology, architecture, and commerce had on his paintings. But Benfey's glosses of Chopin and Cable don't bring Degas into sharper focus; they push the enigmatic Frenchman further to the edges of an already sprawling, speculative biography. Conjecture about the psychological root of Degas's racial ambivalence—namely the possibility of black blood in the American side of the family—is overstated and underdocumented. Ambitious, perhaps, but Benfey's wide net nevertheless allows his primary subject to slip away, lost in a fog of lit-crit theory and psychobabble. (illustrations, not seen)