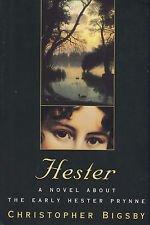 This ``prequel'' to The Scarlet Letter imagines the early life of Hester Prynne and serves as a creative addendum to that classic, but it could not stand on its own. The most impressive facet of this debut novel is the skill with which Bigsby (American Studies/Univ. of East Anglia) imitates Hawthorne's authorial voice, but at the same time one can't help asking whether such mimicry is necessary. There is some fine writing wrapped in old-style layers of verbiage, but naturally there is little suspense with regard to plot as Hester enters into a marriage with Roger Chillingsworth, which at first seems agreeable to both parties but quickly turns loveless and oppressive. Hester nervously escapes across the Atlantic on a boat called the Hope, on which she meets Arthur Dimmesdale. After much digression on the part of the narrator (``Is the coming together of a man and a woman not a route to the spirit?''), the two sleep together. Once ashore, a repentant Dimmesdale insists that he has an obligation to the church and cannot involve himself with her, and pregnant Hester—apparently a pro-lifer, she rejects the idea of forcing a miscarriage and muses, ``Shall the soil refuse the seed?''—is ostracized. There is some imaginative rethinking of the original's behavioral codes as well. ``Proud, independent'' Hester's behavior is only occasionally anachronistic, but Bigsby practically apologizes for Dimmesdale: ``The `A' which he traced with his finger in the air meant not adulteress but first and only, the alpha of his being.'' Some of the freshest material here is the brief final section that deals with Hester's daughter, Pearl, who cannily tries to uncover her father's identity and wonders about her odd mother. An informative ``note'' about Hawthorne points up the book's problem: It tries to be both historical reconstruction and novel and doesn't fulfill either mission completely.