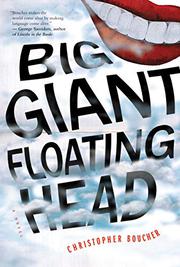 An antic novel assembled from connected metafictional stories that stretch metaphors to their breaking points and beyond.

The 17 stories, several of which have been published earlier in one form or another, feature as their narrator a hapless antihero who shares a name with the author. This Christopher Boucher (only slightly to be confused with the author of Golden Delicious, 2016), a writer who lives in the fictional town of Coolidge, Massachusetts, has either been kicked out by his wife, Liz, or is on the point of being so. He encounters one odd situation after another, generally coping with them less than gracefully. In the title story, for example, a giant face floats through the sky following the narrator until his friend shoots it and stuffs it into an old storage unit. In “Call and Response,” Chris gets a job at a City Hall prayer switchboard, where he's assigned to zap the majority of the prayers that come in, prayers the size of a Volkswagen or a refrigerator, until they eventually threaten to physically crush him. Often, the stories morph words into physical objects. “The Language Zoo” imagines a place with “strange, slithering adjectives, followed by propositions hanging high in their cages or burrowing low in hollowed-out logs.” When a stampede begins, sentences like “I’m so sad and lonely” and “How do I live without love?” break free only to rear their heads in the white spaces of other stories in the volume. The novel's primary problem is that its chapters are all basically variations on a theme. Though the final chapter, “The Unloveables,” offers a bit of hope and a sense of closure, those that precede it are more or less interchangeable.

Best suited for those with a high tolerance for whimsy and literary play.