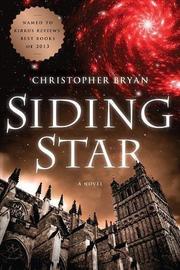 A detective inspector joins forces with an Anglican priest and an astronomer to thwart a shadowy organization’s sinister plans in this debut suspense thriller.

In England’s Exeter Cathedral, a man with a strange black book is found dead in front of the altar, with occult signs spray-painted on the floor and a crucifix overturned. In Australia’s Siding Springs Observatory, a young astronomer named Charlie Brown discovers a supernova that’s sending “a hail of high-energy particles and electromagnetic radiation” straight toward Earth. Linking these events are the machinations of a secret society bent on power and destruction. As DI Cecilia Cavaliere investigates the secrets of the black book, she turns to scholar and Anglican priest Michael Aarons for help. Cecilia, Michael and Charlie must confront a world-threatening challenge with cleverness, courage, science and faith—as well as love and friendship. In this entertaining, thought-provoking novel, Bryan (The Resurrection of the Messiah, 2011, etc.)—himself an Anglican priest—highlights the imaginative sweep and power of Christianity. As Charlie says, “I can say, the universe has to be the way it is, otherwise I wouldn’t be here. And that’s certainly true. But still, to be in awe or not to be in awe, that’s a choice—an emotional choice—and I don’t see opting for one as being any more or less ‘scientific’ than opting for the other.” Bryan’s heroes aren’t just likable but lovable: intelligent, amusing, hardworking, even kind to animals. In contrast, the novel’s villains are truly spooky and disturbing; readers are always aware of the urgency of stopping their evil plans.

An enjoyable novel of spiritual mystery and adventure—well-plotted, intelligent and deeply moving.