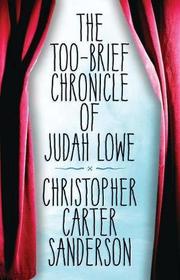 The Too-Brief Chronicle of Judah Lowe

The work’s two sections originated as an Esquire magazine contest entry and a Twitter account. For the competition, Sanderson submitted 79/79/’79, a novella set in 1979 and composed of 79 numbered, titled chapters of 79 words each. He follows this with @1000thenovel, containing 1,000 tweets. Both share a protagonist—not the titular Judah but his best friend, Moe Tazwell, a brainy junior at McTierney High. Shifting among third-person, first-person, and first-person plural narration, the scattershot chapters nevertheless build a coherent picture of a set of students who slack off and show initiative in roughly equal measure. Moe plays the bass, works at an ice cream shop, and drinks; his friends study Latin, wear deerstalker hats, and write for the Alternative Literary Magazine. Various love interests come and go, with sex an ever present taunt. Judah and Moe set up a debate team and take home trophies. Meanwhile, Moe’s brother Taz turns delinquent, painting graffiti and making drug pipes. The 79/79/’79 chapters are more successful than the tweets, though both novellas involve sudden shifts, lacking the descriptive passages that function as transitions in most novels. The best chapter is “Magister Musicae,” a verse tribute to the music teacher. Stand-out tweets often showcase condensed metaphors, as in “Reading Kerouac…was like a cool primer in independence.” A pastoral interlude, when Moe visits a friend’s uncle’s farm in Virginia, provides a welcome contrast to the urban setting. Overall, there is perhaps a vague sense that the title—a nod to The Brief Wondrous Life of Oscar Wao—and structure came first and a linguistically effusive but somewhat plot-light story was developed to fit. The 140-character cast of @1000thenovel (to match tweets’ 140 “characters”) requires inserting many irrelevant, one-dimensional figures. Moe himself, though, is well-realized: both emblematic of his time and an outlier, especially as he jets off to Paris instead of attending college.

An unusual bildungsroman that mostly transcends the limitations of its formats.