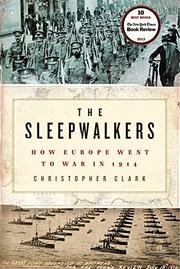 A massive, wide-ranging chronicle of the events, personalities and failures of the run-up to World War I.

Clark (Modern European History/Univ. of Cambridge; Iron Kingdom: The Rise and Downfall of Prussia, 1600–1947, 2006, etc.) lays out the long and violent history of Serbian nationalism, the confusion in the dying Austro-Hungarian empire and the struggle for dominance between the British and Russian empires. While explaining the irredentist mindset of Serbia then, the author also illuminates the causes of the Balkan unrest that erupted again in the 1990s. Surely he read every journal, letter, accounting and government document related to every nation and player in this period; indeed, there are points where some readers may wonder if this is a case of research rapture. Patience will be necessary to wade through the myriad details. However, given the vast amount of available material on World War I and the daunting task of trying to produce a readable account, Clark has succeeded admirably. The most remarkable fact about the crisis that led to this war is that none of those involved had any clue as to the intentions of not only their enemies, but also their allies. In fact, they weren’t absolutely sure who the enemy would be. Consequently, many, including Czar Nicholas II and Kaiser Wilhelm II, tried to head off the conflict right up to the end, each waiting for someone to do something as the world stumbled into war.

For readers who seek a quick overview of one of the most convoluted periods in history, look elsewhere. For those who enjoy excellent scholarship joined with logical composition and an easy style of writing, save a (wide) spot on your bookshelf for Clark’s work.