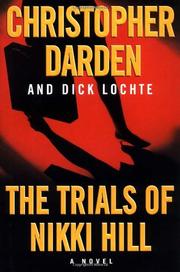 THE TRIALS OF NIKKI HILL

O.J. Simpson assistant prosecutor Darden teams up with suspense writer Lochte (The Neon Smile, 1995, etc.) for this earnest, shapeless tale of—what else?—a stand-up deputy D.A. fighting for truth and justice in the jungles of Los Angeles. When the D.A.’s office finds the diamond ring that lately graced the finger of TV interviewer/gossip columnist Maddie Gray in the pocket of Jamal Deschamps, the South Central homeboy found fleeing from the alley where Maddie’s nude body has been dumped, they waste no time prosecuting the bejesus out of him. Nikki Hill, the deputy D.A. who’s just been recalled from a slow-death posting out in Compton, has a bad feeling about this case, but her boss, D.A. Joe Walden, orders a full-court press, and the race is on between the prosecutors and Jesse Fallon, the high-powered attorney who takes over Jamal’s defense. In no time, Jamal’s proved an alibi, and Walden & Co. are back to go. Wilting under the hostile TV lights, Walden demands another arrest, and the lucky number goes to Dyana Cooper Willins, a movie star married to a top music CEO. Even though there’s solid evidence that Dyana attacked Maddie (in self-defense? in an attempt to wrestle her blackmail folder away from the blackmailer?) with something an awful lot like the murder weapon, the stakes for two potentially wrongful prosecutions of African-Americans in the City of Angels are enormous. Darden and Lochte powerfully convey the desperation of a D.A.’s office under pressure to do something without any clear idea of what the something should be, and the infighting among prosecutors, politicians, and the police that hamstring the investigation. What they don’t do is bring any order to the investigation, or create characters—except for Nikki, your standard Wonder Woman with a troubled background—who stay in the memory longer than a news story. The result is an ant farm full of bustling but anonymous movement, a sociological primer that would take the skills of Tom Wolfe to turn it into a novel. “Trials” is right.