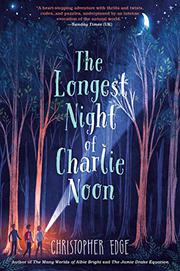 THE LONGEST NIGHT OF CHARLIE NOON

Lost in the woods beyond their English village, three schoolmates spend a terrifying night during which the boundaries of time dissolve.

Eleven-year-old Charlie and her friend Dizzy set off for an afternoon, searching for “Old Crony,” who left the secret messages Dizzy found in the woods—or so their classmate Johnny Baines has claimed. Instead, frightened by Johnny’s masquerade as a bloodied monster, they run blindly into the trees. Shortly, all three are lost in what is suddenly a trackless, endless forest amid a fearsome storm. Using science theories about time, a quotation from T.S. Eliot, secret messages, and elements of quest-patterned fantasy, Edge creates a historical thriller set in 1933 in a realistically detailed natural setting. The author of The Infinite Lives of Maisie Day (2019) and other time-bending titles populates this tale with a tomboy (11-year-old Charlie loathes her real name, Charlotte), nature-loving Dizzy, and mean boy Johnny Baines, “the toughest kid in school.” Dizzy has light brown skin and a “lolloping walk” thanks to an early bout with polio; the other two are likely white. Charlie’s first-person present-tense narrative is suspenseful, ending with welcome relief. “We can change the world,” Charlie says, as they emerge the next morning. A final chapter summarizes their later lives: how they were, indeed, changed by the events of that night and their contributions in World War II.

A gripping, thought-provoking adventure to read and discuss.