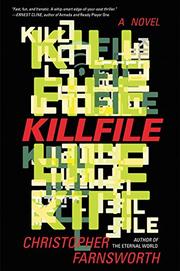 Hired by billionaire Everett Sloan to determine whether a whiz kid who used to work for his data-mining outfit stole company secrets to start his own operation, mind-reading investigator John Smith finds himself targeted by a conspiratorial group with secret CIA connections.

Years removed from quitting the CIA, which trained him on how to use his skills, Smith is no ordinary telepath. Not only can he "hear" what people are thinking, he also can project thoughts and fears into their heads. The problem is, when he defends himself from an attacker by implanting a traumatizing memory or crippling feeling, he himself retains a percentage of the pain or suffering. High-tech bad boy Eli Preston ("the next Zuckerberg"), the data thief, is so concerned that Smith will reveal his illicit government ties that he wants him 100 percent dead. Though Smith is no slouch at fisticuffs, his powers are neutralized when thugs are delivering blows to his head. He also suffers without his meds, haunted by the memory of interrogators torturing and killing a prisoner in Bagram who was telling the truth when he said he didn't know where Osama bin Laden was. Now on the run, his credit and bank accounts voided by the powerful bad guys, Smith gathers up strength to take on a wider-reaching threat than he envisioned. He gets help and then some from Kelsey Foster, a fetching, now-former associate of Preston's. Though Farnsworth takes his time detailing Smith's past and the military's interest in "mind warfare," that doesn't diminish the appeal of his flip, unusually compelling hero or the up-to-the-minute freshness of the story.

Farnsworth, author of the fantastical Nathaniel Cade series (Red, White, and Blood, 2012, etc.), stands to expand his following with this clever, offbeat thriller.