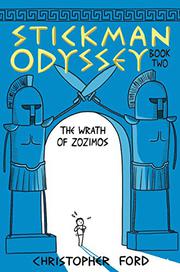 From the Stickman Odyssey series, volume 2

This graphic novel is an epic at the speed of a flipbook.

Stick figures are easy to draw. Even when hundreds of soldiers are massed around the city of Sticatha, they’re all just circles and lines. The Stickman Odyssey books seem to be based around an obvious joke: Epic quests and fervent romances are acted out by characters with dots for eyes. That would explain the hectic pace. If the adventures are never more serious than a Warner Brothers cartoon, that's OK. Zozimos can be fighting a giant boar god on one page, then wandering the desert, then—somehow—turn into a goat. But this book has actual themes: Zozimos has to learn to control his anger and balance his desires for peace and war. And stick figures aren’t good with themes. Their little dotted eyes can convey only so much emotion. The nuances might come through if Ford slowed down the action from time to time. There’s a late scene where two characters, sailing a warship across the ocean, just stop and talk about their love lives. It’s a touching moment, one of the few in the book. Thrilling as the story is, when Zozimos says, “There’s always another adventure!” it begins to sound like a bit of a threat.

The jokes are funnier than in volume one, but readers may wish there were more space between them.