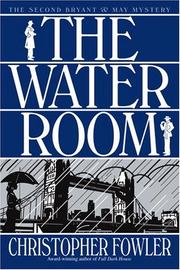 During one of the rainiest years in the City’s history, the decrepit leaders of London’s Peculiar Crimes Unit (Full Dark House, 2004) must navigate two unofficial investigations: the death of elderly Ruth Singh and the skullduggery behind a scholar’s research into London’s extensive underground river system.

Benjamin Singh wants Arthur Bryant to look into his sister’s death. He found her in the basement of her Victorian home on Balaklava Street, dressed to go out, hands folded, dead of a heart attack, with her mouth full of river water. Her house is on a street named after a Crimean War battle—as Arthur is quick to point out in one of the innumerable and fascinating digressions on the history of London that bubble up through the story like one of the forgotten subterranean rivers on which London is built. Few people know the network of old waterways as well as academic Gareth Greenwood, who’s accepted an all-cash job as a guide to a mysterious Egyptian searching for the “Five Rivers of the Underworld.” Greenwood’s wife asks Bryant’s colleague John May to investigate when Greenwood makes out his will. Meanwhile, two other residents of Balaklava Street die, and the water table is still rising.

Fowler’s tale—humorous, engaging, at times incoherent—inundates readers with historical details, myths, subplots, and maps and then tacks on a dénouement that seems to belong to a separate novel.