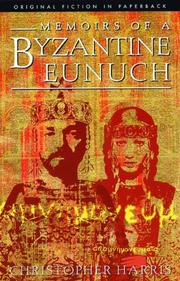 MEMOIRS OF A BYZANTINE EUNUCH

Another fictional memoir from the author of Theodore (2001), this one about the adventures of a eunuch in ninth-century Constantinople.

Being kidnapped is rarely a way of getting ahead in the world, but it seems to have worked for narrator Zeno. The son of a well-to-do Roman colonist in Asia Minor, Zeno is captured by a marauding band of the Rus (Vikings) while still a boy. Promptly castrated and sold as a slave to an innkeeper in Constantinople, he grows up in a tavern on the outskirts of the capital. A Christian scholar named Constantine, interested in Zeno’s knowledge of the Rus dialect, purchases the boy and introduces him to the higher circles of the Church and Imperial Court; he eventually becomes one of the court eunuchs who handle the administration of imperial policy. This is not purely a desk job. One of Zeno’s first assignments is to secretly escort the young Emperor Michael III to various taverns and brothels, where he can amuse himself unhindered by the imperial prefects. Zeno’s success in this undertaking wins him favor from both the emperor and (more importantly) his uncle Bardas, an army general who has allied himself with Michael against the boy’s mother, Empress Theodora. Not all the intrigues are political. The recent success of Muslim invaders at the empire’s frontiers has led some churchmen to speculate that God is punishing Christians for the idolatry of icons. The possibility of civil war looms as Basil the Usurper raises an army and lays claim to the throne. Who said anything about turmoil? This is just daily life in Byzantium. Author Harris knows his territory well and succeeds in making the fairly complex politics of the Eastern Empire intelligible and interesting to neophytes, but the story in the foreground is pretty shopworn.

Your basic Horatio Alger dressed up in eunuch drag.