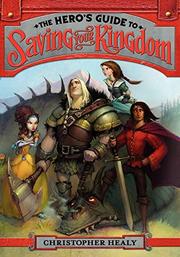 THE HERO'S GUIDE TO SAVING YOUR KINGDOM

From the Hero's Guides series, volume 1

Instead of finding Happily Ever After with their princesses, four Princes Charming (Prince Duncan insists they pluralize the noun, not adjective) must team up on a farcical quest to save their kingdoms.

The bards have the story details wrong, and each Prince Charming that rescues a princess actually has a name. Bold, party-crashing Cinderella wants adventure more than sheltered Prince Frederic does. Prince Gustav's pride is still badly damaged from having needed Rapunzel's teary-eyed rescue. Through Sleeping Beauty, Prince Liam learns kissing someone out of enchanted sleep doesn't guarantee compatibility, much to the citizens of both kingdoms' ire. Although she loves wacky Prince Duncan, Snow White needs some solitude. The princes-in-turmoil unite to face ridiculous, dangerous obstacles and another figure underserved by bards' storytelling: Zaubera, the witch from Rapunzel's story. Angered at remaining nameless, she plots to become infamous enough, through ever-escalating evil, that bards will be forced to name her in their stories. The fairy-tale world is tongue-in-cheek but fleshed out, creating its own humor rather than relying on pop-culture references. In this debut, Healy juggles with pitch-perfect accuracy, rendering the princes as goobers with good hearts and individual strengths, keeping them distinct and believable.

Inventive and hilarious, with laugh-out-loud moments on every page.