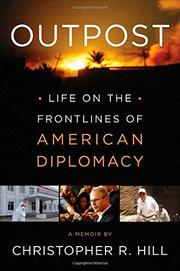 Life on the Front Lines of American Diplomacy: A Memoir

The dean of the Josef Korbel School of International Studies at the University of Denver reflects on his more than 30 years in America’s Foreign Service.

From his days as a Peace Corps volunteer in Cameroon—he still insists it was his favorite job—to his final post as America’s ambassador to Iraq, Hill’s career covers a lot of territory, both geographically and in terms of our diplomatic history. He entered the State Department during the Cold War 1970s and became the nation’s first ambassador to Macedonia. Hill’s service included two more ambassadorships—Poland and South Korea—and an appointment as assistant secretary for East Asia. The best of his smoothly recounted stories, and the largest part of this narrative, center on three excruciatingly difficult assignments. First, he chronicles his memories of helping the irrepressible Richard Holbrooke end the war in Bosnia, negotiations that ended in the Dayton Peace Accords. Hill’s affection for and exasperation with “the Holbrooke force field” emerge from numerous episodes that add up to a memorable portrait of an unusual and remarkably effective diplomat at work. Second, as an add-on to his East Asia portfolio, Hill helmed the Six Party Talks with North Korea aimed at dismantling that country’s nuclear weapons program. The negotiations proved unsuccessful, but Hill’s retelling demonstrates the difficulties and the value of diplomacy even when the primary objective remains unrealized. Third, the author discusses his final, frustrating year-plus in Iraq when, seven years into the war, the State Department was still struggling to establish a meaningful role. A parade of famous names—presidents, secretaries of state, vice presidents, foreign heads of state, senators, generals—marches through these pages, and readers will delight at some of the shots fired and bouquets thrown at powerful personages who’ve been responsible for our foreign policy for the past 40 years.

A must for anyone contemplating a Foreign Service career and for general readers looking for insight into diplomacy conducted at the highest levels.